The Civic Antiquarium Museum is housed inside the Biondi Morra Castle in the historic centre of Morra De Sanctis.

Inaugurated in June 2007, the exhibition illustrates the archaeological research carried out across the municipal area. The artefacts on display include grave goods from the Samnite necropolis of Piano Cerasulo, and items unearthed during the excavations at Piano di Tivoli between 1979 and 1985.

The central theme of the exhibition is dedicated to the necropolis. The oldest tombs date back to the 8th-7th centuries BC The type of materials they are made from are indicative of the shaft tombs of the Oliveto Citra-Cairano culture, whose main settlements were found along the Upper Ofanto Valley, the Ufita Valley and the High Sele Valley.
The tombs on display include a series of elaborate grave goods that would indicate women from a high social class, as evidenced by the grave costumes embellished with bronze items (mainly brooches, of which there are an incredible variety, and peculiar ogee-arch bracelets, which were the “guide” fossils of this culture). The male grave goods from the Orientalizing period include weapons, alluding to the deceased’s role as warrior, sacrificial objects and vessels decorated with protomes of the wolf, which the Samnite tribe of the Hirpini considered their totem animal.

With its extensive and rich display of archaeological finds, the Antiquarium has preserved important aspects of the pre-Roman Irpinian civilisation. 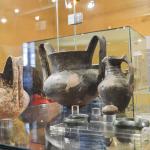 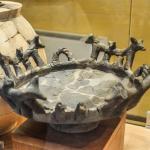 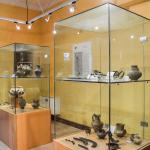