The Baronial Castle (Grimaldi Princes) of Monteverde, also known as Grimaldi Castle, is located on the highest point of the Salita Castello (Castle Ascent).

Built on the crest of a rocky slope dominating the Ofanto valley below, it was built by the Lombards and the first records date back to a document of 897, which states that the village had a fortified building.

The dominations that have alternated over the centuries have brought about changes to the stronghold.
Built on a trapezoidal base of roughly hewn and carved local stone, it was adapted and enlarged in the 15th century by the Aragonese, with the addition of four corner towers, two cylindrical and two square, and the drawbridge, now lost.
The Castle was almost entirely rebuilt following the terrible earthquake of 1851, acquiring its current configuration, which retains the Aragonese layout resulting from the modifications made in the 15th century. The towers, embrasures and rectangular windows are still visible on the outside, while inside there is a chapel with an altar, a holy water stoup, made by Carpencivo by order of Bishop Loseto in 1343, and some frescoes.

The Baronial Castle served both as a fortress, defending the surrounding territory from enemy incursions, and as a noble residence; in 1744, in fact, the Barons of Sangermano made it their home. Other aristocratic families that followed over time included the Orsini, the Guiscardo, the Caracciolo, to whom it belonged until the abolition of feudal rights in 1806, but above all the Grimaldi, whose name the building still bears today. In 1532, the Castle, together with the territory of Monteverde and other fiefs, was donated by the Emperor to Onorato I Grimaldi, Prince of Monaco, in exchange for his loyalty and that of his successors.

Completely renovated in 2006, the Baronial Castle (Grimaldi Princes) offers an evocative view of the valleys below and houses the Wheat Museum. A place where history is evoked through modern and innovative technological installations, which make the visit, enhanced by knowledgeable guides, dynamic and interesting, in one of "Italy's Most Beautiful Villages". 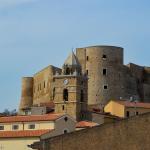