The Ducal Castle of Bisaccia stands on a spur of Mount Calvario.

Built by the Lombards around the middle of the 8th century and remodelled by Frederick II of Swabia following the 1198 earthquake, this bastion was built as a stronghold to control a strategic defensive line, with the function of protecting the territories of western and northern Puglia.

In the 16th century, having lost its military and defensive function, it became a fortified noble residence and its 42 rooms housed, among others, the first Duke of Bisaccia, Ascanio Pignatelli, whose family coat of arms, which held the Ducal Castle until the early 19th century, is preserved on the main door of the residence. According to tradition, the literary scholar Torquato Tasso stayed here in 1588 as a guest of his friend, then feudal lord, Giovan Battista Manso.

Large river stones mixed with squared limestone blocks and very hard mortar make up the imposing defensive walls of the Ducal Castle, over which stands a square donjon tower, originally equipped with a drawbridge, from which, from its 12 metres high, you can admire the entire valley below.
Through a large entrance portal, and after passing a short hallway, you enter a paved courtyard from which you can access the rooms on the ground floor. A flight of stone stairs, dominated by an artistic and elegant loggia, leads to the main floor, where there are several restored rooms, including a charming hall, now used as a conference room.
On the upper floor, the fascinating loggia, formed by twenty-eight arches on small columns made of local carved stone, offers a wonderful view.

The Civic Archaeological Museum has recently been opened and houses various exhibits, including the Tomb of the Princess, dating back to the Iron Age (late 9th-7th century BC). It is particularly important for its precious set of valuable vases, jewellery and other items, found in a well-defined stone enclosure, indicating the presence of a noble person inside.

Not far from the Co-Cathedral (or Church of the Nativity of Mary), the Ducal Castle dominates the town of Bisaccia and offers visitors beautiful landscapes and architecture. 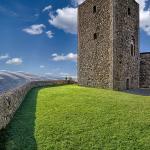