There was most likely a consecrated church in San Martino even before the year 1000. The first documentation of the consecrated church is found in a parchment from Montevergine dated May, 1286. On 13 August, 1694, the Church of San Martino Vescovo (Saint Martin of Tours) was solemnly consecrated by Cardinal Orsini, just as the Church of San Giovanni Battista (Saint John the Baptist) had been the previous day. Elected Pope with the name Benedict XIII, Cardinal Orsini returned to San Martino on the evening of 23 May, 1729, and stayed at the Convent of Santa Caterina (Saint Catherine). The next morning "His Holiness consecrated the only altar in the church of the archpriest in the aforementioned land of San Martino, and in dedicating it to the holy bishop of 'Tours', he sealed away the relics of Saints Primus and Felician the martyrs there". When the church in the historic town centre, dedicated to Saint John the Baptist, became a "collegiate church" in 1736, the archpriesthood associated with this church was suppressed. However, the lively protests of the authorities and the San Martino locals and the disagreements between the canons and the parish priest forced the cardinal of the time to restore the Church of San Martino's status as both parish church and seat of the archpriest in 1766, without abolishing the college of canons. The Church has suffered frequent damage due to earthquakes. With a resolution of 23 March, 1836, it was declared unsuitable for use, and the sacred functions were performed in the Chiesetta del Salvatore (now non-existent). The current Church of San Martino was built in 1928. The altar inside was donated by Maria Anna del Balzo. 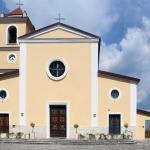 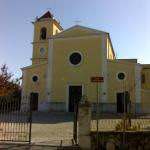 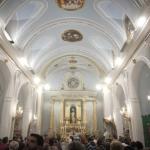