The Sanctuary of San Gerardo Maiella (Saint Gerard Majella) is a place of worship located in Caposele, in the hamlet of Materdomini.

Dedicated to Saint Mary Mater Domini and Saint Gerard, the Sanctuary may have remote origins. The most ancient information on its existence dates back to the 13th century when it was among the properties administered by the archdiocese of Conza under the title of Sancta Maria de Silere (Saint Mary of the Sele). In 1527 this ancient title was changed to Sancta Maria Mater Domini, or "Mother of the Lord", and it was in this period that the Sanctuary became the destination of many pilgrims from the villages of the Sele Valley and surrounding areas.
In 1754 Saint Gerard was assigned to the Redemptorist Convent of Materdomini, where he died a year later. Such was the love and devotion of the faithful for the Saint that following his canonisation in 1904, the Sanctuary was awarded the prestigious title of "Minor Basilica" by Pope Pius XI in 1930, thus assuming its current name.

The Sanctuary of San Gerardo Maiella stands in the same place where, according to legend, Saint Mary, presenting herself as Mater Domini, appeared on an elder tree to some peasants, to whom she requested and obtained that a chapel be built in her honour. In 1929, the place of worship was joined by the Church of the Redeemer, built to accommodate the large number of pilgrims who came to Materdomini every year in devotion to Saint Gerard.
Destroyed by the terrible earthquake of 23 November 1980, the Sanctuary was rebuilt and reopened for worship twenty years later, on 30 April 2000, on the occasion of the Great Jubilee. Compared to its original neoclassical style, embellished with stained glass windows depicting the life of the Saint, the building today is no longer rich in friezes and frescoes, although it was rebuilt on the same plan as the previous one. Despite this, it is still one of the best-loved places of worship in Irpinia and attracts thousands of visitors every year.

Embraced by the splendid natural setting of the Sele Valley, the Sanctuary of San Gerardo Maiella is one of the strongest and most devotional examples of Christian faith in southern Italy. 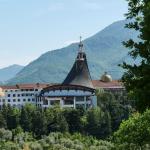 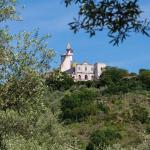 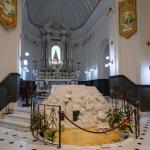