The Sanctuary of Montevergine is a site of religious interest in Mercogliano.

The religious complex was commissioned by Saint William of Vercelli (1085-1142) who was guided by a strong devotion to the Virgin Mary. The church’s history is closely tied to the picture of Saint Mary holding the Infant Jesus, which can be found in the Old Basilica and to which many intercessions are attributed. Even today, this work of art is still known by the name of “Madonna di Montevergine” or “Mamma Schiavona”. Vested with a solemn grace, Campania’s best-known Marian church stands at 1200 m above sea level in a stunningly beautiful landscape. Visitors can admire the scenery on a short trip on one of Europe’s steepest and fastest cable car routes, which takes worshippers from Mercogliano to the Sanctuary in just 7 minutes.

Today, the Sanctuary of Montevergine is known as one of Italy’s six territorial abbeys, and is a destination for tourists who come to worship Mary each year. An imposing corner staircase leads to the entrance of the complex, which has two churches: the Old Basilica and the more recent Cathedral Basilica. The Old Basilica was extended towards the end of the 12th century, when it became too small to accommodate all the monks and the growing number of pilgrims who came to visit. The last restoration in 1645 gave the building its typically Baroque features, although it was based on the old Gothic-style building, traces of which can still be seen in certain parts of the Church. This is where to find the Sanctuary's real treasure: the miraculous effigy of the Virgin. The new Basilica Cathedral, on which construction started in 1948 and was completed in 1961, has a main nave and two aisles separated by arches on both sides. Built in simple, modern Romanesque style, it was designed to allow many pilgrims to attend the services. Inside the new basilica is a marble throne bearing a nailed cross, which is where the painting of “Mamma Schiavona” was placed between 1960 and 2012. There are many rooms surrounding the two churches, including the three cloisters, the library and the crypt. There are also reception rooms and the MAM (Museo Abbaziale di Montevergine, or Abbey Museum of Montevergine) which was opened in the year 2000 to display the countless testimonies to the people’s devotion, and to Montevergine’s famous “Juta”: the annual climb up to the Sanctuary which takes place on the Candelora festival on 2 February.

A treasure trove for faith, art and history, the Sanctuary of Montevergine is one of the most important and significant devotional sites not only in Irpinia but in all of Campania. 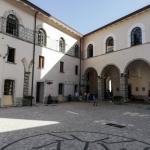 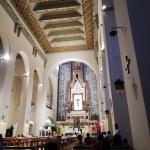 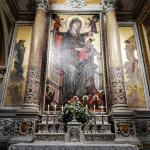 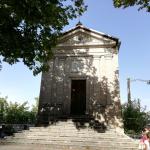