The Museum of the Palazzo della Dogana dei Grani (Palace of the Grain Toll House) is located in Atripalda, in Piazza Umberto I.

The exhibition houses several artistic artefacts, found after the earthquake that struck Irpinia on November 23, 1980. It is housed in the Palazzo della Dogana dei Grani (Palace of the Grain Toll House), built in 1883 and named after the fact that, especially during the reign of the Bourbons, it was used to sell grain from Puglia.

Since 1950, the Palace has been used in a wide variety of ways and its architectural structure has been modified for each different use. Since 1993, the building has been home to the Museum and sometimes also hosts temporary exhibitions, proposed by both institutions and private individuals and evaluated by the Management Committee.

Surrounded by a setting of considerable historical importance, the exhibits housed in the Museum contribute to enhancing the historical and cultural heritage of the community of Atripalda. 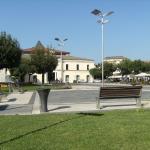