The origins of the building are traced back to the Lombard age, around the 9th century, when the fortifications located in the territory of Sant'Angelo were part of the defensive system that marked the northern border between the Principalities of Benevento and Salerno. The fortress stood on its present site, where significant traces of early medieval masonry still remain embedded in the tower walls. Starting from the Norman period, the monumental complex began to develop around a trapezoidal courtyard, over which three round arches covered in marble opened, giving access to the rooms on the first level. Further extension and transformation work was carried out in the 18th century, during the rule of the Imperial Princes of Genoa. Damaged by the earthquake of 23 November 1980, the Castle underwent extensive restoration work, consolidating the vaulted ceiling of the first level and the flat roof.

Today the Imperiale Castle houses the Opera Museum and the Museum of Emigration and Rural Life. The first, a genuine archaeological site due to the presence of the primitive 11th-century Cathedral of Sant'Antonino Martire, preserves the architectural, sculptural and archaeological evidence of the original structure. The second, on the other hand, tells the story of the great phenomenon of emigration through a collection of 200 objects and narrates the life dedicated to the agriculture of men and women who formed such a strong bond with the land of Irpinia that this exhibition space aims to remember and enhance.

A historic symbol of the Sant'Angelo community, the Imperiale Castle has come back to life as the cultural centre of the town. 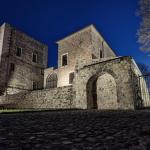