The Church of San Nicola (Saint Nicholas) in Volturara Irpina is a place of worship in Piazza Roma.

Known as the Mother Church of this Irpinian town, it was built in the 16th century because of the devotion of the people of Volturara, who at that time traded with Puglia, a region with a strong following for Saint Nicholas of Bari. During the years that followed, several earthquakes made the church unsafe for the faithful. Partly due to its unsuitable size - the building was too small to hold the large number of people during religious services - the municipality made plans to build a new church in the late 19th century. Severely damaged by the earthquake of 23 November 1980, the Church was reopened for worship twenty years later, and was restored to its former splendour.

In classical-Baroque style, the Church of San Nicola di Bari (Saint Nicholas of Bari) now has a Latin cross floor plan with a nave and two aisles. The ceiling of the nave is vaulted, adorned with religious frescoes, while there are numerous alcoves in the aisles. At the centre of the Church is the marble altar, lit by the majestic cupola above it. The Church's artistic value is also enhanced by the statues of saints and 18th-century paintings depicting the Holy Family, The Dead Christ, Mercy and The Redeemer with Mary and Saint Peter.

As a religious symbol of the Volturara community, the Church of San Nicola dominates the town’s main square, once called “Piazza del Travicello”. 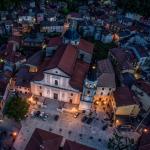 Open during the hours of religious services