The Masseria Complex "Il Parco" (The Park), also known as "Casale Lo Parco", is located in the village of the same name, in the Municipality of Frigento.

Built in the 18th century and set in a hilly agricultural area of great scenic value, the complex is part of the type of rural architecture typical of Irpinia and especially widespread in the period between the 16th and 17th centuries. These rural settlements, which are quite frequent in the area, are genuine autonomous communities, probably modelled on the early medieval curtis, with a small church for divine offices, a manor house and farmhouses for the farmers.

The most prominent element of the entire farm complex is the dovecote tower, the result of changes over time and linked in particular to the feudal regimes, which used pigeon farms for various purposes, such as agriculture and, in particular, fertilisation of the land. In addition to the dovecote tower, other characteristic elements are the staircase leading to the manor house, the loggia, the small clock tower and, above all, the charming chapel dedicated to Saints Ciriaco, Donato and Gaetano.

Despite the fact that the weather has caused a gradual deterioration of the characteristic structures over the years, the Masseria Complex "Il Parco" is one of the most significant examples of an 18th-century country house in the Ufita Valley countryside. 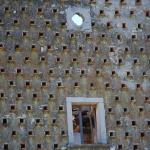 Always usable from the outside