It stands in the square in front of the Collegiate Church of San Michele Arcangelo (Saint Michael the Archangel), along the west side of the Orsini Ducal Palace.

It was built using local travertine in 1733 by Nicola and Arcangelo Antinolfi, expert craftsmen from Cava de' Tirreni. In addition to supplying water for the local people, it served to collect water from the hamlet of Sorbo.

It is composed of a large square basin with mouldings that round off its shape. At the corners, there are four lions facing outwards and seated on a stand that divides the basin into four sectors. At their feet is a circular bowl, resting on and protruding over the edges of the basin, which receives the water falling from the lions' mouths. In the middle of the basin rises a squat squared stele with the coat of arms of Solofra - a radiant anthropomorphic sun - engraved on the sides. At the top of the stele are four dolphins facing in the same direction as the lions, with their chests resting on the edges and their heads protruding, and water coming out of their mouths. Their twisted tails rise upwards to form a column that holds a shell-shaped basin that collects the water gushing and rippling out from its centre. 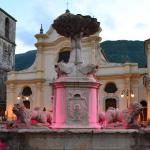 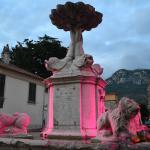 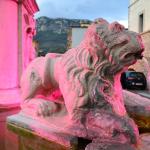 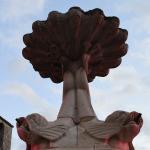 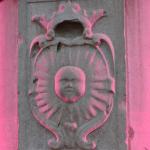 The fountain of the four lions is located in the center of Piazza San Michele. Therefore, it is always accessible.
LUN MAR MER GIO VEN SAB DOM