A representative place of one of "Italy's Most Beautiful Villages", Serro della Croce is a 1,200-metre-long nature trail that crosses the hill of the same name, one of the three hills on which Monteverde lies.

The location takes its name from the iron cross erected in 1944, in commemoration of the missions of the preaching fathers, and the hill is historically linked to a legend that tells of the struggle of good against evil, or the challenge of the Archangel Michael against Lucifer. One of the large boulders, known as "lu carabbutt", is believed to bear the imprint of the Saint's hand, which rested there after his victory in the raging battle against the devil.

The Serro della Croce path leads to one of the highest points in the town, from which there is a breathtaking view of the valley below and the Vulture, and is reached by crossing rich vegetation, among trees and rocky masses set in mutual balance. A path that is not only appreciated for the extraordinary natural beauty in which it is immersed, but also for being accessible to those with motor, visual or hearing impairments. 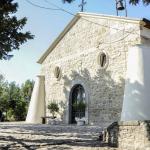 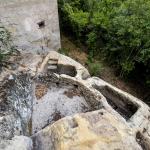 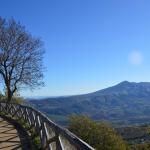 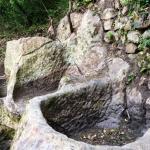 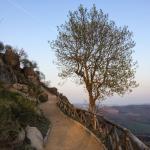