The Casino del Principe, improperly called "Casina del Principe" in common language, is a palace located in Corso Umberto I, in the historic centre of Avellino.

Probably dating back to the end of the 16th century, it was built by the will of Prince Camillo Caracciolo to access a sumptuous park behind it, currently coinciding with the Rione Parco district. The park, rich in trees, plants and exotic flowers, was the ideal place for hunting and leisure.
Subsequently, the structure was converted into a tavern and hotel for travellers coming from Naples and heading east, towards Foggia, Bari or other Apulian locations. In fact, in a document of a well-known traveller of 1800, Cesare Malpica, the Casino del Principe is described as a "large furnished hotel"; another document of a few decades earlier, reported that among the properties of the prince of Avellino there was a tavern at Porta delle Puglie.

The structure is divided in two floors, with an internal courtyard with a square plant and side openings leading to the upper floor. In a perspective position with respect to the main portal, there is a drinking fountain which rises on a lava stone base and which, in ancient times, was positioned outside the structure.
Within the walls of Casino del Principe, you can also admire a garden and an underground hall, equipped with a staircase that leads to an underground pool-theatre, obtained from the pre-existing cistern of an old Roman aqueduct. Today it houses the Association of Certified Accountants of Avellino, the music school "W. Kandinsky" and many organizations, among which Info Irpinia, Avionica, ARCI and Pro Loco Avellino.

The Casino del Principe, strong historical evidence of the presence of the Caracciolo family in the provincial capital of Irpinia, still preserves its simple and elegant artistic charm. 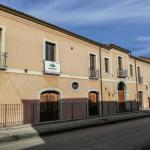