The technological set-up of the MIA Avella - Museo Immersivo e Archeologico di Avella (Avella Immersive and Archaeological Museum) at the Avella Baronial Palace is a project that is part of the regional development plan for the Sistema Irpinia. It is a multimedia itinerary featuring projections, graphic suggestions, talking pictures, and Virtual Reality stations to tell the story of Avella and the palace from the first settlements in the area, through Roman Abella, the Middle Ages, and arriving at the 19th century and modern Avella. The story of Avella is intertwined with international events to contextualise the development of the Irpinia area. Educational stations and stations dedicated to blind and visually impaired people complete the experience.

Room 00
In the first space that visitors encounter, which also serves as an entrance and access point to the adjacent archaeological museum, the main element consists of a model depicting the Avella area with an animation of the topographical evolution of the town in various eras projected onto it.

Room 0
The first room of the route through MIA Avella hosts a sliding monitor, which explores the area's centuries-old history in depth through macro chronologies and offers important background to the visit.

Room 1 - The origins of Abella
Continuing the itinerary, visitors are faced with an exciting rear projection (videomapping on the wall) that puts the material exhibited in the rooms of the Archaeological Museum into its chronological context, while the voice of an aoidos tells stories related to the etymology of the town's name and tales of the first settlements in the area.

Room 2 – Roman Abella
The second room has a projection (videomapping on the wall) and is dedicated to the Roman phase of Avella. To accentuate this narrative, there is a wall depicting the Decumanus Maximus in the room.
The Roman knight Lucio Egnazio Invento, to whom the memorial stone is dedicated, is the protagonist of the narrative of the room that deals in particular with issues related to the traditions of games at the amphitheatre and the historical events of Abella in the Republican age.

Room 3 - The Middle Ages
The third room, dedicated to the Medieval period of the city and to the cult of the Archangel Michael, features a double projection (videomapping), on the wall and onto a model.
In the projection on the wall, the narration is told by Bishop Paulinus of Nola and deals with issues related to the medieval era of Avella, exploring the religious and political life of the area in depth. In the middle of the room is a facsimile of a large book, on which the story of Saint Michael’s Cave is projected. The narration delves into the history of the Church of San Michele Arcangelo (Saint Michael the Archangel) and Saint Michael’s Cave, a place of devout worship of the Saint in the area.

Room 4 - Francesca de Avella
Then, in the fourth room, the visitor comes into contact with the figure of Francesca de Avella who, played by an actress immortalised with the green screen technique and displayed on an 85" monitor, tells the memories of her family. Following her narration, the events of the 15th century in the area and the story of the De Avella family come to life on the wall, thanks to an exciting projection (videomapping on the wall).
The narration in the room opens with the legend of the Persian prince Cofrao and a beautiful girl named Bersiglia. Then, the character of Francesca de Avella narrates the deeds of her family and her father, then telling her own personal story, up to the ultimate fate of the fiefdom. From Francesca's words, we learn several stories related to the 15th-century events in the area and the honours received by her father Rainaldo IV at the Angevin court.

Room 5 - From 1500 to 1800
The fifth room traces the history of the Baronial Palace in terms of its succession of owners in the period between 1500 and 1800. Theatrical tricks, such as the mapping that gives a view of the imaginative garden created by Luigi Vanvitelli, entertain the visitor.
Sound suggestions represent the voices of different historical figures who saw to the creation of the building and experienced personal events in its rooms. Referring to their words, the projections on the wall show the evolution of the furnishings over time, symbolising the stylistic and historical evolution to which the palace bears witness. The historical figures identified for the narration of these events are: Girolamo Colonna, Pietro Antonio Spinelli, Ottavio Cataneo, Carlo Doria, and Livia Colonna.

Room 6 - The 1800s
The next space is dedicated to the narration of the events of the 19th century, from the perspective of Avella and from the wider Italian perspective. It is set up like the study of a scholar and features dialogue between prominent figures of this period, played by actors immortalised with the green screen technique and displayed on monitors reminiscent of ancient paintings. To achieve this result, the historical events of which the identified characters are protagonists are interlinked in a script that enables clear and to-the-point narration. The historical figures identified to represent all the facets of the historical era in question include nobles of the area - José María Álvarez de Toledo y Palafox Gonzaga and Ferdinando Alvarez de Toledo y Acuña - and prominent figures of culture and politics of the time, such as Camillo Benso Count of Cavour, Guglielmo Pepe, Matilde Serao, Pope Pius IX, and Giovan Pietro Vieusseux.
The experience of the room ends with a 19th-century divertissement: a "retractable" digital door, consisting of an 85" monitor, suggests an opening onto a ballroom for a pleasant musical interlude.
All the rooms along the route are enriched with wall graphics and backlit lightboxes, evocative display solutions with high visual impact.

Room 7 - From the past to the present
The purpose of the final room, equipped with swivel armchairs and Virtual Reality visors, is to connect the historical narrative to the present to make the visitor understand how the town's current appearance and the historical evidence in the area are the result of its centuries-old history.
There are four themes to be explored through Virtual Reality, which, thanks to computer graphics and 360 VR drone shots, enable you to learn about four different moments in the history of the area:
- The Funeral Rite: The main moments of the ritual and the burial in Roman times are evoked through a graphic computer reconstruction of a Roman funeral rite, carried out near one of the monumental burial chambers in Casale. In particular, the close connection to the funerary monuments in the monumental necropolis of Avella is highlighted.
- The Gladiator: This video reconstructs a clash between gladiators in the amphitheatre of Avella using computer graphics. A gladiator prepares for the fight in which he can earn his freedom. An emotional and introspective experience in the process of preparing for the fight, dressing and choosing weapons for combat.
- The Castle: The reconstruction using computer graphics traces life inside the Avella Castle and scenes of medieval knighthood. A night walk through the silent rooms of a castle, accompanied by the thoughts of a lady preparing to marry off her daughter. An unprecedented and private interlude in the female world in ancient times.
- Drone flight: Drone shots show the present-day town, gliding over the most significant places in Avella. An evocative flight over the main natural and man-made beauties of Avella, created with the latest technologies in the field of 360 aerial filming.

Educational Room
On the ground floor there is a route including three edutainment stations specially designed for a younger audience:
- The archaeologist: At the dig and learn station, reproductions of some finds equipped with NFC tags are placed in a structure with a touch table. Once placed on the touch table, they enable the visitor to access in-depth content. A touch monitor also displays a quiz related to the archaeological discoveries in the Avella area.
- The historian: A large touchscreen desk allows you to explore the papers of a local history scholar, rediscovering through his studies some local traditions related to folklore, food, and historical Avella fashion.
- The castles: On the walls of the hall are two large paintings - consisting of 55" monitors in styled frames - depicting the most famous castles in the Irpinia area. All you have to do is walk in front of them to listen to the narration of the historical events witnessed by their mighty walls.

Inside the Educational Room there is an area dedicated to users with disabilities (blind or visually impaired), featuring 3D reproductions of some of the most significant finds in the archaeological museum. The reproductions are fitted with NFC tags so that when they are placed on a table equipped with sensors, the visitor can listen to their audio descriptions. 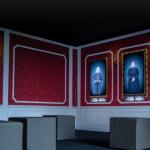 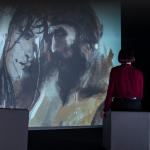 Share
Run the Social Login to request the pass!