The Archaeological Museum of Carife is located in Via Stefano Melina.

The museum compound, inaugurated in January 2019, collects the finds from about 300 tombs, discovered between the municipalities of Carife and Castel Baronia during the various archaeological excavation campaigns conducted between 1981 and 1990. A territorial museum with about 450 exhibits from grave goods, dating in particular from the Samnite period, namely from the 5th-4th centuries BC

Ceramics, weapons, bronze and silver jewellery, pottery, utensils and personal items tell a lot about the pre-Roman civilisations of Baronia. Everything is collected in three rooms, which house the precious heritage of ancient Samnite and Roman finds: the first room, on the ground floor, exhibits finds from the necropolis of Castel Baronia, discovered in the Serra di Marco area; on the upper floor, on the other hand, the second exhibition room houses the grave goods from the two necropolis of Carife, in Piano la Sala and Addolorata; the third room, on the ground floor, is dedicated to didactics and is enriched by the presence of a 1:1 scale reconstruction of a chamber-tomb reproducing one of the burials of the archaeological area of Addolorata. Also on the ground floor, a space to the right of the entrance displays bricks and ceramics found in Carife, in the Tierzi area, recovered from the excavation of a kiln complex.

Set up to reconstruct the traces of ancient history and culture, with the intent of preserving, enhancing and disseminating the rich archaeological heritage of Baronia, the Archaeological Museum of Carife is a prestigious showcase admired by an ever-increasing number of visitors. 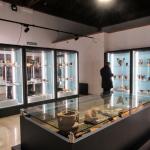 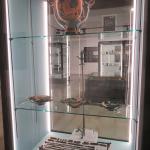