The first documentation of the complex dates back to a donation made by Marino Calzarone, recorded in a notarial deed dated 6 December, 1408, kept at the State Archives of Naples. It was the basis of the construction of the Church of S. Caterina (Saint Catherine), originally built as a chapel intended to house the tomb of Fabio Della Leonessa (later expanded and rebuilt in the 18th century). Subsequently, the monastery of the monks of the Benedictine Congregation of Monte Vergine was built near the Chapel of Santa Caterina. An inventory from 1696 shows that "the convent has white walls and five windows... Attached to the Church is the Convent, with six cells upstairs and six downstairs, with a garden surrounded by walls and other rooms".

The Convent was then suppressed under the pontificate of Innocent X and abandoned until 1722, when it was given to the Franciscans by Benedict XIII. In 1729, the same Pope stayed there while returning to Rome from Benevento. After it became a hospice, a regular community was established in the Convent following the decree granted by the Holy Congregation on 10 December, 1724. The expenses for the construction of the Convent were also borne by Duke Fabio Maria Pignatelli Della Leonessa, who was buried there with his wife Cristina di Sangro. The title of "Royal Convent" was bestowed on it by decree of Ferdinand II of Bourbon, who placed it under his protection on 13 July, 1854.

Due to the large number of clerics, the Priesthood of Philosophy was established in August 1939 and was appointed as the seat of the Novitiate until the earthquake of 1962. The earthquakes of November 1980 and February 1981 seriously threatened the stability of the Convent and the Church, forcing the friars to find accommodation in private homes made available by some families in the town.

Inside, you can visit the magnificent cloister made of cut stone with a central well and the church renovated in recent years, the tomb of Duke Fabio Maria Pignatelli Della Leonessa and his wife Cristina Di Sangro, several 19th-century canvases, inlaid and polychrome marble altars, and a valuable choir. The façade is formed of a vestment of tuff blocks, at the centre of which opens the late Baroque worked stone doorway with broken tympanum, surmounted by a rose window. 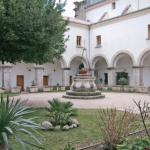 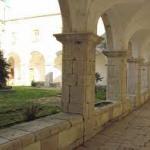