The lack of documents showing the date of construction of the Collegiate Church of S. Giovanni Battista (Saint John the Baptist), also known as the Chiesa del Borgo, means it cannot be dated precisely. However, its origins are certainly medieval and more or less contemporary to the Castle, since the Collegiate Church is located in the heart of the village near the defensive structure. Therefore, as happened in many other places, it was probably built a short distance from the defensive fortress. However, the only certain information dates back to the time of the Spanish Viceroyalty. One of the four original bells of the Church Bell Tower was engraved with the date 1521, while another was inaugurated in 1565, by the Duke of San Martino, Vittorio Loffredo. However, the aforementioned bells no longer exist, since the metal was used to make two new bells in 1921, by melting the old ones. The dominant features of the religious building's current configuration date back to the 17th-18th century, to the time of Cardinal Orsini, Archbishop of Benevento, then Pope Benedict XIII. In fact, Vincenzo Maria Orsini visited the Valle Caudina repeatedly and stopped at the Parish Church of S. Giovanni Battista on Saturday, 11 October, 1687, when he celebrated Mass, later visiting the other churches of the town, at that time numerous, many of which have disappeared, but which have left traces in the toponyms of the historic centre. The importance of the Parish Church of S. Giovanni Battista had gradually grown over time. In fact, from a limited jurisdiction covering only a small part of the ancient village, following the Bull of the Archbishop of Benevento, Cardinal Serafino Cenci, of 22 November, 1736, the Church was elevated to a "collegiate church" through the suppression of the archpriesthood at the Church of S. Martino Vescovo (Saint Martin the Bishop) and the transfer of the assets to the Collegiate of S. Giovanni Battista. The reaction of the San Martino locals and the public authorities and the conflicts between prelates led the new Cardinal Giovanni Battista Colombini to restore the previous situation in 1766, with the Church of San Martino as the parish church and seat of the archpriest, while still maintaining the College of Canons. The Collegiate Church has a single nave with a series of side chapels. Inside, in addition to the baptismal font, the well-preserved confessional dating back to the 18th century is worthy of note. You can also access the square bell tower from inside. Two interesting commemorative stone plaques are located inside the Collegiate Church. The first is set in the wall on the right of the apse and refers to the consecration of the Church on 12 August, 1694. The inscription in Latin refers to the faithful being granted an indulgence of one hundred days. Much more interesting, however, is the second stone plaque related to the medieval worship of Saint Palerio the Bishop and his Deacon Saint Equitius by the people of San Martino, which is located under the high altar. This plaque seals the recess containing the relics of the saints, which were buried there on 5 March, 1713, in the presence of Vincenzo Maria Orsini, Cardinal Archbishop of Benevento, after having been found by chance on 16 June, 1712, by some masons while they were working on the construction of the foundations of a new building.
Following repeated restoration work, the Church was fully restored in 2015. 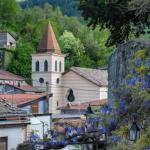 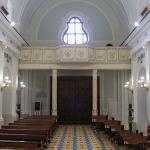 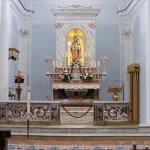 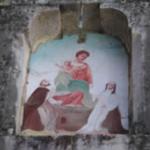 by reservation and / or during religious services