The Archaeological Area of the Roman Amphitheatre of Avella is a place of historical interest, located on the homonymous street.

Built in the late Republican age, in the first century BC, at the end of the decumano maior (current corso Vittorio Emanuele), the Amphitheatre lies, to the south-east, on the remains of Samnite walls, to the north-west, on a natural slope. Among the oldest in Campania, it's compared to that of Pompeii, not so much for its size (60 meters in length and 35 in width, therefore smaller) as for the material and construction technique in opus reticolatum of the yellow type.

Great flight of steps, ima, media and summa cavea, embraced an arena located at a lower level than the remaining planking level, as depicted in an honorary base of 170 AD, preserved at the main entrance of the Baronial Palace, in Piazza Municipio. The first two caves, lower and central, are still visible with some tuff seats; while few traces remain of the upper summa cavea. The arena was accessed through two doors: the “porta triumphalis” and the “porta libitinensis”. The highest authorities descended from the gate of victory with a chariot, acclaimed by everyone. They stopped at the centre of the arena and then got on the podium from where they watched the show; from the second gate the dying and the losers of the fights were carried away instead. A third, smaller gate allowed access to a small temple dedicated to a god, to whom the gladiators turned before going down to the arena for the fighting. Today, with its efficient info point and a bar area, it's a popular destination of cultural visits and suggestive seat of important musical and theatrical performances.

The Roman Amphitheatre of Avella, witness to glorious events, memorable stories, field of games and gladiator fights, still stands out today in all its majesty in the Archaeological Area of the town, just outside the inhabited centre of the San Pietro district. 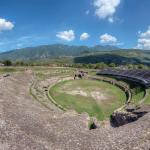 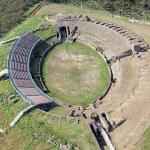 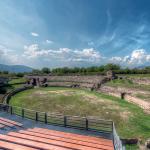 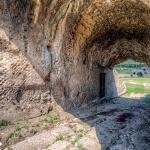 Request information
Run the Social Login to request the pass!