The Roman Cisterns are an architectural work located in Frigento, accessible from Via San Giovanni.

This mighty water complex, built in opus incertum and dating back to the Republican age, is located at the highest point of the municipal territory of Frigento, 911 metres above sea level. According to some sources, there used to be eleven rooms, but now there are only four, three of which can be visited and are accessible through a non-original entrance.

Each of the tunnels within the work served the function of collecting rainwater, melted snow and water from a spring close to the cisterns. The water collected was purified and distributed not only to the community of Frigento, but also to a large part of the inhabitants of neighbouring areas. In addition, a distribution duct has recently been discovered between Via San Giovanni, where the entrance to the cisterns is located, and Via San Pietro, where there is a bath house that probably dates back to the first and second centuries AD Finally, the importance of this imposing architectural work is demonstrated by the inscription in the former cathedral of Frigento, which mentions the architect Antistius as the designer of the structure.

A symbol of great ingenuity and planning, the Cisterns of Frigento are a significant sign of the influence of the Roman era on the local community. 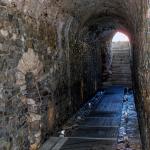