The Municipality of Castelfranci is located within the area of the Calore Valley. It's a town with 1,927 inhabitants, located 450 metres above sea level, at 33 km from Avellino. The territory extends for 11.69 sq km and the adjoining municipalities are: Montemarano, Nusco, Paternopoli and Torella dei Lombardi. It's crossed by the river Calore.
The etymology of the name probably comes from Castrum de Francis, “Castle of the Franks”, because of the particular position on the border between Benevento and Salerno. The inhabitants are called Castellesi and Saint Nicholas of Bari is their patron saint.

The Church of Santa Maria del Soccorso, unlike other places of worship, was erected by will of the people.
It is said that the secret association of Castellese, participating in the insurrectionary uprisings of 1820, met frequently at Vittoli Palace.
Among the leading figures of the Carboneria castellese was Captain Casimiro Celli, accused of high treason by the Bourbon government and sentenced to 30 years of imprisonment, partly condoned by King Francis I of Bourbon.

The history of Castelfranci has ancient origins: the archaeological finds unearthed in the territory of Baiano, a district of the municipality, confirm the settlement, already during the Roman period, of several very small tribes. The town arose, however, during the 9th century AD, with the name of Castrum Francorum, representing a fortification erected to guard the Duchy of Benevento by the Franks, who arrived in Italy alongside Ludwig II the Germanic.
In Norman times, it was administered by Guaimario Saraceno, Lord of Montemarano; after being ruled by several local lords, it was acquired by Giovanni Virgato, Giovanni Della Leonessa and the Della Marra family. One of the oldest documents concerning Castelfranci dates back to 1248 and is the Papal bull issued in Lyon on 6 June, with which Pope Innocent IV returns to Bella De Amicis, widow of William of Montemarano, the land of Castrum de Francis owned by the De Montana family.
Hard hit by the plague of 1348, the town flourished significantly only in the 16th century, in the period of Spanish domination.

Castelfranci is an enchanting place where one can admire its truest spirit, tasting the Taurasi with its garnet reflections. It’s time to leave as gourmets to rediscover together this flavour of Irpinia 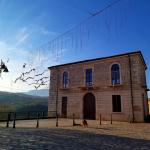 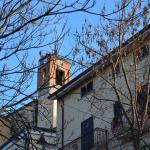 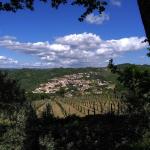 An eagerly awaited event for the local community and beyond, the Castelfranci Wine Festival is…

In the heart of Castelfranci, a period residence for holidays and events, whose vigorous walls…

It is a symbolic place of devotion for the community of Castelfranci. Built in the 16th…

Its origins are ancient and it was once a burial place, as evidenced by some of the sacred…