The ruins of Sant'Angelo al Pesco represent the remains of an ancient medieval fortress, located in the town of the same name in the Municipality of Frigento.

About 7 km from the town centre, the site is also known by the dialect name of "Preta re lo Piesco", due to its location on a striking and majestic rock. The name "al Pesco" may refer to the Oscan word peesslùm or pestulùm, meaning "hillock", from which the Latin pesculum, meaning "protruding stone", may have derived, while the place name "Sant'Angelo" reflects the Lombard cult of the Archangel, which is widespread in southern Italy.

The existence of an ancient abbey-fortress is already attested in a document from the 11th century, which shows a donation made to the Monastery of Santa Sofia in Benevento. Over the years, the manor lost its importance and fell into disrepair, becoming a hideout for bandits in the 19th century. Today, the site preserves what remains of the fortress, which in the past dominated a vast area and was visually linked to the other neighbouring manors of Guardia Lombardi and Rocca San Felice.

A place of great historical interest, the site of Sant'Angelo al Pesco combines legend and folklore, through the traditional stories handed down for centuries in the Frigentina community. 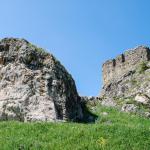 Always visible from the outside