The Municipality of Sant'andrea Di Conza is located in the Upper Irpinia area. It's a village with 1,461 inhabitants, located 660 metres above sea level, at 72 km from Avellino. The territory extends for 7.05 sq km and the adjoining municipalities are: Conza della Campania and Pescopagano. It's crossed by the Ofanto river.
The etymology of the name is inspired by the cult of the patron saint of the town, while the specification "di Conza" refers to its geographical position, near Conza della Campania. The inhabitants are called Santandreani and Saint Andrew the Apostle is their patron saint.

During the "Maggiaiole Ritual", typical of Sant'Andrea di Conza, the girls of the community go to the Co-Cathedral of Santa Maria Assunta (Saint Mary of the Assumption) in Conza della Campania to ask the Virgin Mary to find a good boyfriend.
In Sant'Andrea Di Conza seven furnaces have existed for the production of bread.

The origins of Sant'Andrea di Conza are controversial. According to some sources, the village arose after the earthquake of 990 and the subsequent malaria epidemic, when groups of farmers settled around the Church of Sant'Andrea, located between Conza and Pescopagano. According to another hypothesis, the first settlement was born with the arrival of the Bulgarians in Irpinia, called by the Lombards to repopulate the inland areas of Southern Italy, which had remained deserted due to the conflict against the Byzantines.
Surely, Sant'Andrea di Conza was mentioned, for the first time, in a deed of donation of 1161, with which the Norman count Gionata of Conza and Carinola undertook to sell the Church of Sant'Andrea to the Church of Santa Maria dell'Episcopato of Conza.
From that moment on the village belonged to the Archbishop's authority until the abolition of feudalism in 1806. During this very long period, it was administered by numerous families: Del Balzo, Gesualdo, Ludovisi and Mirelli.

In Sant'Andrea di Conza you can discover workshops, associations, social projects, characters capable of embodying that change that is the basis of the paradigm of responsible travel 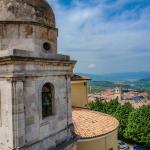 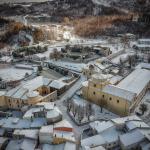 A convent complex located in the highest part of the town, of which few ruins remain

In operation for over half a century, it is a symbol of the community and a key site of a…

Building dating from the 13th century, which became the bishop’s seat. The historic three-…