The Municipality of Aiello del Sabato rises in the area of the Sabato Valley. It's a town with 4,035 inhabitants, located 425 metres above sea level, at 6 km from Avellino. The territory extends for 10.87 sq km and the adjoining municipalities are: Atripalda, Avellino, Cesinali, Contrada, San Michele di Serino, Serino and Solofra. The Sabato river runs through it.
The etymology of the name seems to come from the Latin ager, which means "field", and Sabatia since it was founded by Sabatio, son of Clus. The inhabitants are called Aiellesi. Saint Sebastian and Saint Fabian are their patrons.

Joanna I of Anjou (1326-1382), queen of Naples, stayed in Aiello del Sabato for 25 days in the historic Ricciardelli Palace.
The village of Tavernola San Felice, which currently has about 600 inhabitants, was a municipality of the Kingdom of Italy until 1927, when it was incorporated into the territory of Aiello del Sabato.

The foundation of Aiello del Sabato seems to be linked to Sabatia, a mythical Samnite city, but what is known with certainty about its history is that in Roman times its territory was included in the colony of Abellinum, while in the Lombard age it was the hamlet of Atripalda.
In the second half of 1200 this fiefdom was granted to the noble Jean de Bailly by the Angevins and the Orsini and the Caracciolo are mentioned among the noble families who owned it.
The territory of Aiello del Sabato was strongly shaken by the earthquake of 1980, but it should be emphasized how this municipality, unlike many other towns in the province of Avellino, has had - probably also thanks to its proximity to the capital - a significant increase in the number of inhabitants over the last few years.

Imagine the pleasure of experiencing nature at a slow pace. Imagine giving new value to your time, walking or cycling through centuries-old chestnut woods. Aiello del Sabato is the right destination for you. 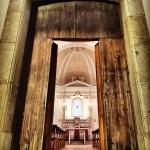 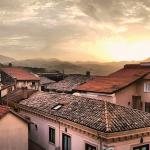 A 17th-century church of considerable historical interest, situated in the centre of Aiello…